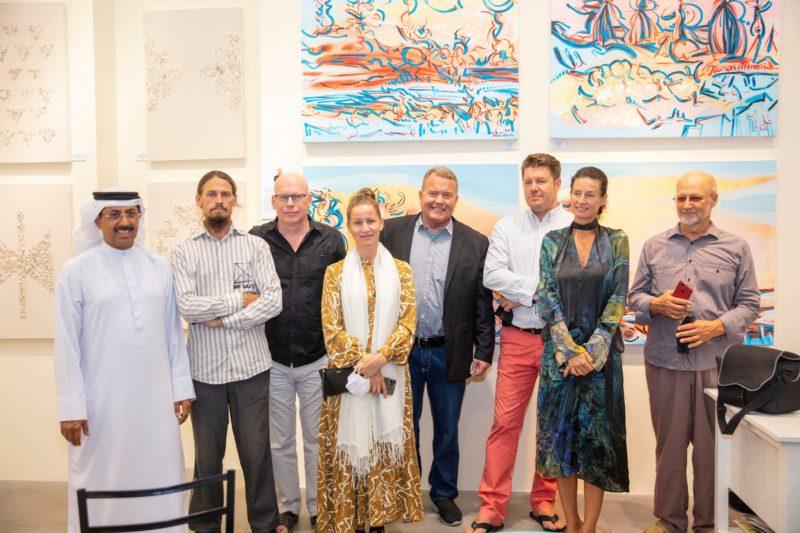 It’s been eight years since Toomas Altnurme, an international artist with Estonian roots, relocated to the United Arab Emirates. In addition to being an active artist, he is a lecturer of fine arts at one of the oldest universities in the United Arab Emirates, located in Al Ain. Five years ago, he organized the first Estonian Art Month in the UAE, bringing together the two different cultures. This year, Altnurme again took the initiative and revived this cultural bridge. The Estonian Art Month culminated with an exhibition held at the Art Hub Gallery of the World Trade Centre in the country’s capital Abu Dhabi.

Toomas Altnurme and the „Beauty of the Desert“

The art month in Abu Dhabi – a springboard to the world for Estonian artists! Seven Estonian artists who were selected in a competitive tender traveled to the Emirate of Abu Dhabi and lived a month in creative residency at Al Khateem Art Hub in the middle of a desert oasis. During this period, they immersed themselves in the local culture, went on solitary retreats into the desert, and devoted themselves to their art.

For the first time, the Art Month program also featured music, with the creation of an inspiring ensemble that mutually motivated all participants. Singer and songwriter Emma Johanna Lepasoo made a valuable contribution, filling the desert silence with magical sounds. The mastermind of the idea, Toomas Altnurme, proposed expanding the format of the Art Month in the future to involve creative people from other fields as well.

The peak of the Estonian Art Month was the opening of the exhibition in Abu Dhabi, which was attended by several well-known local entrepreneurs as well as officials from the Ministry of Culture. Krista Reinhold represented the Estonian Embassy in Abu Dhabi. Visitors to the exhibition were able to perceive how different artists experienced the desert on canvas in their own unique way. What was exciting was the way that the paintings reflected the physical influence of the creative residence. While some artists had a more open creative process, for others it was more reserved.

The distinctive creations of Kerttu Siplane, who has a background in fashion art, conveyed an excellent understanding of the local landscape. In her unique way, she herself prepared a color palette from local natural rocks and formed them into assembly-like compositions. Kerttu created her art in the most public and Arabic-style space of the creative residency. It was wonderful to see how she endlessly experimented with the material, her ability to focus, and her openness to dialogue with both the surrounding spaces and the people on site.

Hannes Võrno, who also has a degree in fashion, surprised everyone with tender art in pastels. His four monochromatic pieces of art form an ensemble that symbolizes the human life cycle. The works of Hannes are minimalistic but tense. They breathe and pause – and at the same time are charged with movement. The paintings of both Kerttu Siplane and Hannes Võrno could be perceived as meditations among more forceful and colorful works of art.

Einar Vene’s fascinating naive paintings touch the boundaries of mysticism and metaphysics. The artist uses a variety of symbols that he invites the viewer to unlock as a trigger to their imagination. As the habits and traditions of the local cultural space also apply to the visual arts, Einar’s works play between what is permitted and what is forbidden. Bold bright colors and exciting hidden clues on religious topics added a playful dimension to the entire exhibition.

At the opening of the exhibition, Emma Johanna Lepasoo gave a heartwarming musical performance. The singer was dressed in a local Arabic-style shiny turquoise costume, with blue guitar and chair. All this interacted with the colorful paintings of Einar Vene and offered the viewer an exciting visual dialog. Emma started the concert with an a capella spiritual folk song, „My Heart Wake Up“. She then performed her own songs „The Sun Rises“, „Field Flowers Are My Song“ and the English-language song „Arabian Nights“. Written especially for the opening of the exhibition, inspired by both personal travel impressions and the works of the resident artists.

Emma arrived at the opening of the exhibition in Abu Dhabi directly from her creative residence in Liwa, 300 km away, where she had been filming a music video for her song „Sea of Memories“. This place is the last oasis in the United Arab Emirates before the beginning of one of the largest deserts in the world – Ar-Rub ‚al-Khali (The Empty Quarter).

Explaining her choice to film a video for this song, the singer said: „When I walked in the desert between sand dunes, I sometimes felt as if I was at the bottom of the sea. Except that there was no sea, of course. This atmosphere provided an ideal visual support to the sound language. The music video will be produced in collaboration with a local film production.”

It was interesting to see the change in the process – although Einar Vene painted his works in the same semi-open studio-type room as Raivo Kelomees, their works were displayed in different parts of the room. Raivo Kelomehe’s two paintings stood out from the rest of the exhibition. Since he was the last to join Art Month, the local environment had not influenced his paintings as much as those of other artists. Instead, his paintings follow a clearly surreal line and reflect unique inland landscapes.  The lines on the canvas intertwine into complex knots that have neither a beginning nor an end. Raivo was one of the two artists who had also participated in the first Art Month back in 2016.

Katrin Karu, an artist whose stellar rise started after the first Art Month in the Emirates, also secured a spot in this year’s list of participating artists. Karu attracted attention not only with her large-scale, bold, and contrasting paintings but also with the silk dress she was wearing at the exhibition opening. When she stood in front of her works in a dress designed to match her paintings, the audience had the impression that the artists had just stepped out of her painting.

This combination formed an exciting symbiosis at the opening of the exhibition. Katrin’s creative process was also fascinating: she was the only one who painted outside the area of the creative residency, supporting the canvas against a high gray wall against the backdrop of the broad desert. The location of her outdoor studio was certainly reflected in the paintings. They were also presented differently at the exhibition – these paintings did not hang on the walls but were placed like protective screens in pairs against each other above the floor on either side of the main entrance of the gallery.

Toomas Kuusing, who in his paintings uses bright and clear colors that resemble the desert sand and sun, offered exciting desert etudes. He also worked in an outdoor studio, albeit in a shady place, overlooking sand dunes. Due to his straightforward technique, the objects depicted in the paintings created a unique graphic composition. This visual combination had a fresh effect on the viewer. It was also interesting to see how his paintings resonated with Einar Vene’s works, amplifying them and in turn being amplified by them when displayed side by side.

While the artists were putting the final brushstrokes to their works in the desert heat, Toomas Altnurme, a legend in his own right, arrived at the creative residency on a motorcycle, threw canvases on the sand and began to paint with passion. Unlike the other Estonians, he had to skillfully balance between several different roles: artist, sculptor, curator, public relations officer, and host – all this while also giving lectures. This multi-layered state is also reflected in the works he displayed at the exhibition – he uses mixed techniques in his paintings. A pastel base layer, which resembles desert views, is covered with distinct dreamlike moods inspired by the Arabic script, drawn with a finer brush.

One of the paintings depicts a mystical genie, personified in the slightly spooky local legends that the owner of Al Khateem’s creative residency shared by the fireside. Altnurme’s works exude the exciting harmony of the artists’ personal style and his extensive knowledge of local culture.

You can find out more about the „Beauty of Desserts“ exhibition here: Estnische Künstler in Abu Dhabi – Die „Schönheit der Wüste“. If you need a translation into your national language, use our contact!

Cover picture: Opening of the „Beauty of the Desert“ exhibition in Abu Dhabi.

Events selected by us can be found under >>> Events <<<

Are you planning a visit to Abu Dhabi? – You can find hotels at our partner Booking.com

You can find our interviews here: Interview | Arttrado.de

If you want to tell us about your exciting art project, use our contact. 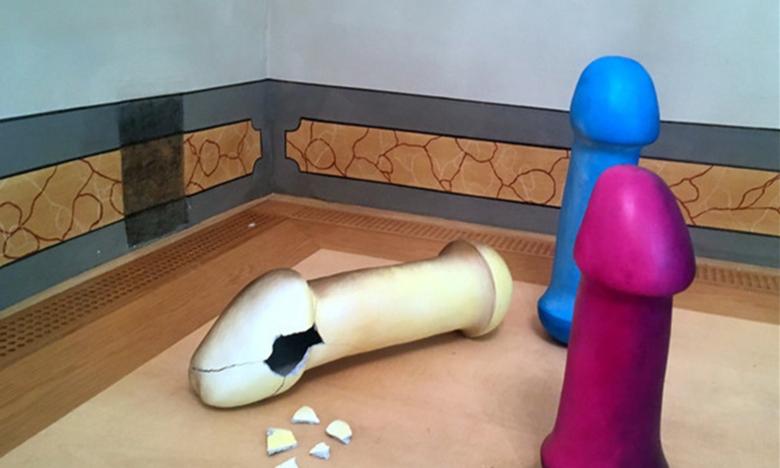 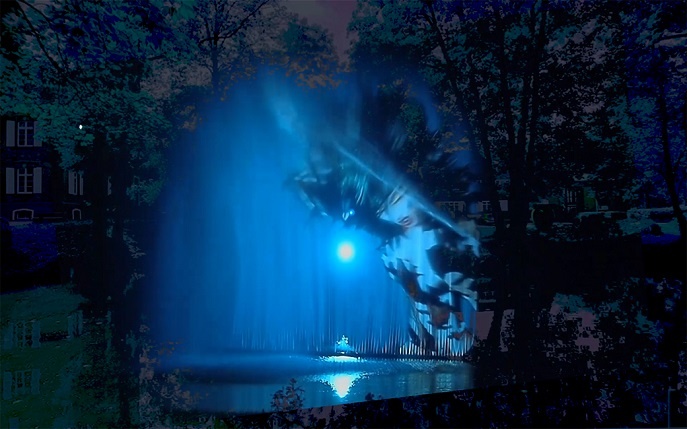 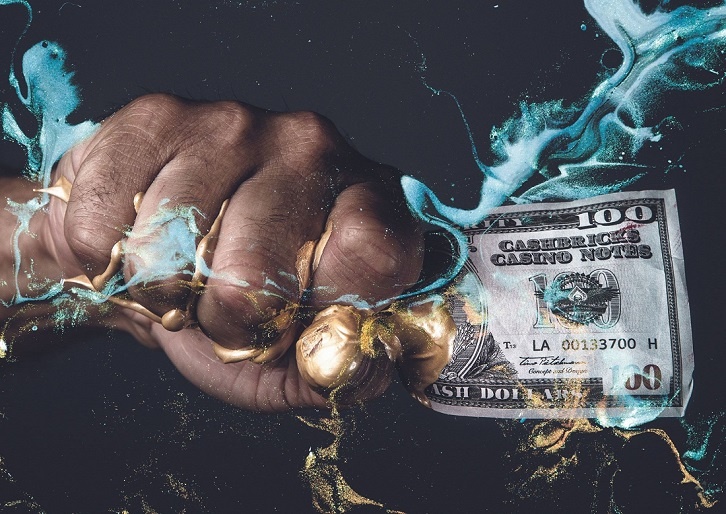